Faculty members O’Brien, Ward, Savage, and Keyser will retire this summer after leaving a legacy at Spring-Ford. 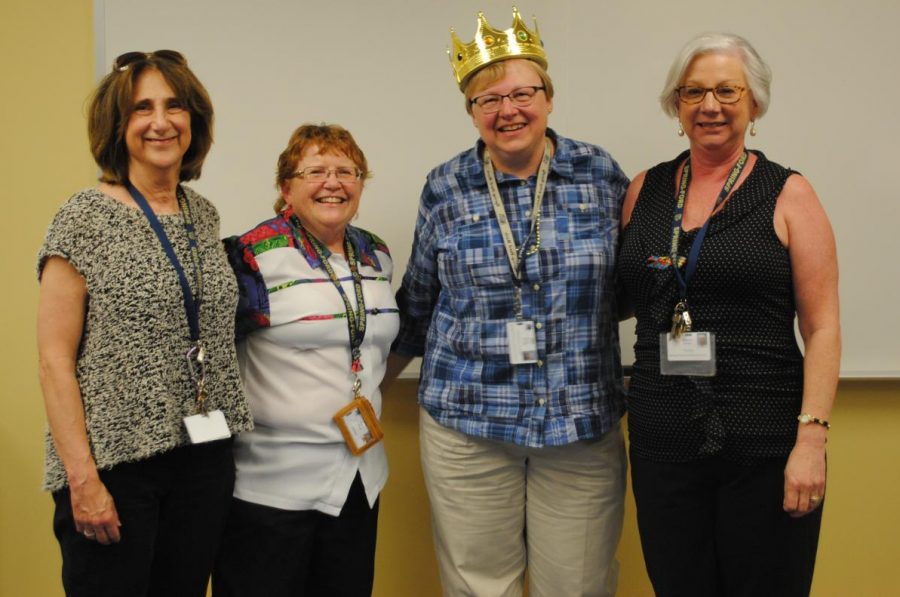 Kathy Savage has arguably the most recognizable voice in all of Royersford.

After all, her audience spans 29 years and thousands of listeners.

As longtime secretary receptionist at Spring-Ford High School, Savage ends announcements every day with her trademark kindness. …“Have a great day, Spring-Ford.”

Savage will be signing off soon, retiring after the school year. She will be joined by three other legendary Spring-Ford faculty members in science teacher Deborah Keyster, Family & Consumer Sciences teacher Diana Ward, and Media Specialist Barbara O’Brien.

Spring-Ford faculty and staff inspire students to achieve whatever their hearts desire as well as instill in students diligence, passion, hard work ethic, patience, and persistence.

They work long beyond the 7:20-2:20 school day to ensure students have the best study guides, notes, video clips, activities, and tests that are challenging enough but manageable.

They become family to many, often seeing students and their papers more than their own family during the school year.

It’s a hard, yet giving job.

You may know Savage from buzzing you in on a day you came late, or maybe guiding you to where your office is when you are lost. Or maybe you know her reminder that we “have two minutes to get to first period.”
In addition to Savage’s 29 years as a secretary, she also subbed at school.

You’d be hard-pressed to find anyone who better embodies Spring-Ford spirit than Savage, a graduate of the school along with her sons, Carl and Mark.

“ I absolutely love it here,” Savage said. “It’s a good place to be. The community is so strong and it’s just perfect to raise your kids.”

Her job at the high school was a perfect match, for Spring-Ford and Savage.“In a way it [the job] chose me,” Savage explained. “I was a stay-at-home mom and just needed to get back into the workforce for myself. I had always loved Spring-Ford and wanted to be a teacher, but I had never gotten the degree for it. Subbing was the next best thing I could do. Then I subbed for the secretary job and learned the woman was retiring, so I applied and got it.”Savage has seen a lot in her 29 years, and the school has grown incredibly.

“Before if there were two parents in a day, that was busy,” Savage said. “Now, there are people constantly leaving and coming in that some of the other tasks I used to do I can no longer because I am so busy.

“Also technology is changing so fast. I used to use a typewriter when I first started here … that’ll show you how long I’ve been here.”

Her philosophy at Spring-Ford is to “always treat people how you would want to be treated, because you never know what they are going through. So I always make sure to be friendly and smile” she explained.

Her favorite part is pep rally and spirit week as a whole.

“It is a time the school is really together,” Savage said. “So many times everyone’s doing their own thing but that week the school spirit is just amazing.”

The community and spirit of Spring-Ford holds a special place for Savage. Clearly it is not a easy transition leaving, spending so much time at her desk in the main entrance of the school.

She has motivation, though.

“I have a grandson named Finley,” Savage said. “He’s two years old and lives in Vermont, so I don’t get to see him as much as I’d like to. That’s the biggest reason for me leaving. I also plan to travel as much as I can with my husband and do all the things I love.

“I love to garden, sew, knit, and walk my dog Eva and now I’ll have time to incorporate that into my life more. I also know I won’t be able to resist visiting Spring-Ford and attending the parade, marching band performances and football games. It’s what I love.”

With a tough goodbye looming, Savage teared up stating “thank you to the staff for their friendship and to Spring-Ford for making the best schools for our kids.”
Goodbye, Mrs. Keyser
A friend who has spent decades making school memorable and rewarding for students is Savage’s dear friend, Keyser.

Keyser has been teaching for 23 years now, 18.5 at Spring-Ford and 4.5 years at Garnet Valley Middle School.

“ I decided to retire this year because I want to travel and spend time with family,” Keyser said. “My husband is retired and has been for six years. We have three grandchildren between us. My daughter, Annie, just had her first baby. His name is Atlantis. Our children and grandchildren that are located outside of Boston and Minneapolis also want more time to be fun and have fun.”

Keyser smiled while adding, “I’m a lot of fun outside of the classroom … Really! I love to laugh and make people laugh, but I’m pretty much all business in the classroom.”

Teaching not only gives opportunities to teach but to also learn a few things yourself. Keyser has learned quite a few lessons in her experience in the classroom.

“The biggest lesson I’ve learned is that things don’t have to make logical sense. It is what it is,” Keyser said. “Also teaching now is completely different-students are completely different. With the development of technology and the distraction of cell phones, motivating and keeping students interested is really a battle.”

Despite the hard lessons and often chaos that students can bring, Keyser finds it more intriguing than intimidating.
“My favorite thing about teaching is that you have autonomy in your classroom. It is also never boring” she smiles.
The years have brought abundant memories and experiences.

“I have a lot of favorite memories-having my children here in school when I started at Spring-Ford, being a color guard “mom,” certain students that I’m still in touch with that really had struggles and personal things that went on and yet they persevered. Students that just needed some encouragement and a hug. Also, I love my colleagues that have always been there to lend a helping hand and the friends I’ve made here.”
Goodbye, Ms. Ward
Ward had been teaching for 33 years, 20 at Spring-ford and said she is now “ready for some fun with many of my retired friends.”

Teaching has been apart of Ward’s plan every since junior high school.

Her Favorite part is the rush.

“It keeps me busy,” Ward said. “Family & Consumer Sciences has so many different subjects within it and most are hands-on projects, so I am never sitting still. Although it is also very exhausting.”

Teachers may seem to have it easy to outsiders for the weekends and summers “off,” but Ward explains, “I have to plan for 3 to 4 different classes every year. I have taught Child Development, Sewing, Personal Living, Nutrition, Consumerism, and Personal Living (Adulting 101). It all takes a lot of time to be fully prepared for every day. Because I teach food and nutrition, I must also grocery shop for supplies for classes.”

After her 32 years, Ward’s biggest lesson had been “how students will always surprise you.”

She has also learned how change is ongoing, stating, “Since I started teaching there are many more mandated requirements (paperwork & record keeping) that teachers must do. During my time here at Spring-Ford, I have watched this district grow from graduating 250 students per class to the current almost 600 students per class.”
The work is not without appreciation however.

“(Ward) is always is so appreciative of her students rather than expecting respect or help, she never fails to say thank you,” Stephanie Pappas, a student of Ward’s, said. “She also knows how to always make her students feel welcomed and important everyday.”

Not to mention alumni reaching out and making memories to Ward that make it all worth it.

“A student, Robin K., went on to study Culinary Arts at Johnson & Wales,” Ward remembered. “While she was there she emailed me to tell me to tell me that she had the opportunity to work with Bobby Flay at an event held at the school. She was so excited, and so was I. It warmed my heart hearing that and is something I will never forget.”

As seen the staff goes above and beyond. The next cycle of teachers certainly have big shoes to fill when joining the family. From our family we say thank you Mrs. Savage, Mrs.Keyser, and Mrs ward for your years of hardwork and touching so many hearts on the community. May retirement treat you as well as you did the community and make sure to stay in touch.
Goodbye, Mrs. O’Brien
O’Brien has learned to roll with changes over the years.

A career changer, O’Brien has helped oversee the high school’s library the last 14 years and will retire over the summer.

“I actually changed careers, I was in IT and I wanted a change,” O’Brien said. “I wanted to work more with people and have that be a bigger part of my job. Also, I liked the fact it involved reading and technology … a combination of both.”

After a year as a long-term substitute at North Penn, O’Brien was hired in 2004.

During the last 14 years the veteran librarian has helped oversee a transformation in the facility, including the introduction of the maker-spaces a few years back and the remodeling of the library.

“The library has been the biggest change (over the years),” she said. “Going from emphasis on books and research to going to an emphasis on technology – almost 100 percent change, I’d say.”

O’Brien didn’t hesitate at all when discussing what she loves about Spring-Ford and will miss.

“Working with the students, it’s been fun and it’s been great to see how students change over the years that they’re here.

Time to spend with friends and family was a big factor in the decision to retire, as O’Brien has her sons’ families and especially four grandchildren to visit.

She will be greatly missed by students, staff, and administration – after all, they’re part of the reason she loves Spring-Ford so much.

“I really did have fun in my job,” O’Brien said. “And I think that’s really important to have a good time, because you’re spending a lot of time at work. I’ve had a really good time and made some really good friends.

“Spring-Ford students are really special. I feel very lucky to have been working at Spring-Ford.”

Spring-Ford students are lucky to have had O’Brien, Savage, Keyser, and Ward as well.