Stage set for ‘Guys and Dolls”

Spring-Ford theatre aims to put on a musical that will be unlike any other in the school’s history. 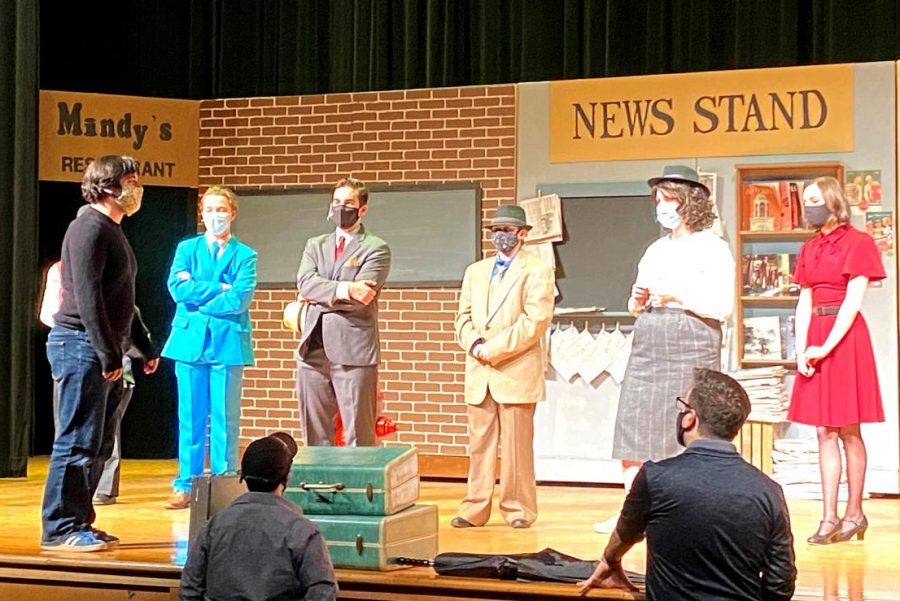 The COVID-19 pandemic has left many starved for entertainment with production for new films and television programs halted and in-person theaters closed.

Those looking for the escapism of a movie or show have had no choice but to recycle old viewing material.

However, Spring-Ford’s theatre department will soon perform the musical “Guys and Dolls” that viewers can enjoy from the comfort and safety of their homes.

“It’s a show about relationships and if they are worth the risk of heartbreak,” said play director Alex Cifelli.

It goes without saying that putting together this year’s performance was extremely different from years past and much more challenging than any other year. Mask mandates, social distancing guidelines, and other safety policies have complicated the already difficult task of preparing for a musical.

“Since we have to limit the number of people in the auditorium and maintain accurate records for contact tracing, we were limited to a small cast,” Cifelli said. “Not cutting people is important to us, so we are actually running three casts at the same time. Given this undertaking, we are actually doing an abridged version of ‘Guys and Dolls’ this year so that everyone can participate.”
The show will be filmed with just cast and crew present without an audience. The performance will then be edited and broadcast at a later date.

Having three casts performing the same musical simultaneously is, undoubtedly, a large complication to this year’s production that presents a logistical challenge. Riley Sullivan, a Spring-Ford senior and actress in the musical, described how having three different casts has impacted preparations.

“A couple challenges we’ve been faced with is the lack of rehearsals since we have three casts that can’t rehearse simultaneously,” Sullivan explained. “So, by default, there aren’t as many (rehearsals) per cast.”

In addition to having fewer rehearsals, Spring-Ford performers have also been limited in their abilities to sing, act, and perform together as they normally would, largely due to the requirement that they wear masks while they perform.

“It has been challenging to act with masks on — you rely so much on your face to convey emotion and we have been learning to use our bodies, voices, and eyes so much more,” Cifelli said.

Spring-Ford performers are exploring new ways to act and connect with their audience this year, including Sullivan, who described her excitement to take on an unconventional role.

“This year I play a gangster, Harry the Horse,” Riley said. “And a couple of other smaller roles. The most exciting thing for me is that this character is a guy, and I’m clearly not a guy, so it’ll be different than anything I’ve ever done before.

“The show is set in New York City, so for me personally, the New York accent is my biggest problem. It sounds Australian for some reason.”

It is abundantly clear this year’s production has challenged members of Spring-Ford theatre department in unprecedented ways. But, what outshines the COVID complications and the unusual challenges is the theme of the show itself and the shared experience of the actors and audience.

“The idea of taking calculated risks, whether as a gambler or in love, resonated with a lot of us during COVID and the choices we have all had to make,” Cifelli said. “Plus, it’s a cheesy comedic parable and we could use a good laugh about now.”

If a good laugh or simply appreciating the efforts of Spring-Ford performers and directors sounds appealing to you, be sure to view “Guys and Dolls,” which will soon be available via livestream.

“We are super excited to present the show this way and a big shout out has to go to Mr. Rothermel and the A/V department for helping us with capturing and editing the footage,” Cifelli said of the production’s new platform.

The goal is to give the audience a show to remember, even if performing has been a bit more difficult in a situation nobody could fathom a year ago.

“I just hope audiences have a little fun while watching and recognize our efforts,” Sullivan said.